When I decided to do my third year of university in London, the thought of experiencing ‘culture shock’ didn’t cross my mind. Sure, I sat through plenty of preparation meetings as my guidance counsellor flashed around her standard U-curve diagram outlining the various stages of acclimating to a new culture, but I wasn’t paying attention. “It happens to everyone,” she iterated and reiterated as I stared blankly at the wall behind her, imagining the brown-brick flat I’d wake up to everyday in Marylebone.

It’s a commonality for students going abroad for lengthy periods of time to underestimate the extent to which they’ll be affected by changes to their environment and daily life, however subtle. It’s also vastly common, as it was in my case, for students to assume they know much more about the culture they’re entering than they do in actuality.

Having grown up in the Deep South between Mississippi and Tennessee, the scope of my knowledge about life in England was humiliatingly restricted to dogeared copies of eighteenth-century Georgian literature, The Holiday, and anything starring Hugh Grant as a charming, intellectual oddball. As thrilled as I’d been about the opportunity to live and study in London for a year, what I was really, at the onset, thrilled about was my own short sighted, glamorized ideas conjured up from stereotype and one-dimensional media representation in my small, American bubble: a Hogwarts-ian university atmosphere, RP accents, multicolored houses sprinkled among Shakespearean pubs, high tea, black trench coats and umbrellas, William and Harry having a casual stroll along the Thames. The list goes on. My life, until that point, had never been set in a sprawling city, save for a three-month internship in New York. Despite the Big Apple being a decent jumping off point, and despite the fact that I considered myself a “city girl” at heart, all of my initial shock upon entering London revolved around the nuanced differences in interpersonal communication.

I’d never been one for small talk, and, where I come from, traditional small talk isn’t much of a practice. In Tennessee, it was never abnormal or invasive for me to meet a stranger and ask them meaningful, sometimes personal, questions about their lives and opinions. In fact, many people, including myself, absolutely love it and defer conversations away from subjects like the weather or what’s on T.V. This was one of the most jarring aspects of arriving in London and striving to make friends. Truth be told, I became complacent with the knowledge that I was migrating to another English-speaking country. As obvious as it might seem to anyone reading this and thinking well, yeah, come on, I hadn’t considered the idea that becoming familiar with the complexities of how people speak to each other can be just as complicated as learning a new language from scratch. It never occurred to me that what I considered friendly, caring behavior could be construed as abrasive, or even impolite to another culture, no matter our shared language or hemisphere. I’d naively ask someone in a bar about their family or job satisfaction and be met with perplexed looks and a lot of awkwardness. It took some trial and error and a fair share of skeptical side-eyes, but I eventually struck a decent balance and figured out how to shape my speech accordingly. Adapting to the way in which people network with each other not only allowed me to find a sense of community in my personal life, but also to succeed in completing a subsequent postgraduate degree and entering the English workforce.

Most of the close friends I made—the friends I still live with in East London five years later—I met because of the second biggest shock to my system upon arriving. My idea of living in a tree-enshrouded apartment block in the center of the city quickly turned into the reality of receiving a housing assignment in Northwest London’s Zone 5 – a much more suburban area of Greater London than I’d expected, which turned out to be one of the greatest fortunes in my life. From my time spent living outside the city center, I became familiar with the ins and outs of what actually makes up English culture, rather than the completely skewed version most of us grow up with in the States. The small community of friends I made introduced me to the slang, the foods common to daily life, the 37-odd dialects common to the U.K., the dry sense of humor, the cultural staples of being raised in England (i.e. hours of Alan Partridge reruns) and the dense international and intercultural diversity that makes London such an incredible and unique place to be.

While it took me awhile to stop feeling like an outsider, five years later, I can’t imagine living anywhere else. Using London as my springboard changed the way I continued my travels in the years after, molding me into a more conscious, socially aware global citizen. If I could pass anything I’ve learned along to all my fellow twenty-somethings leaving home and scattering across the globe, it would be this: 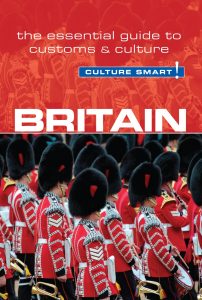 Culture Smart! Britain: The Essential Guide to Customs and Culture Culture Smart! USA: The Essential Guide to Customs and Culture