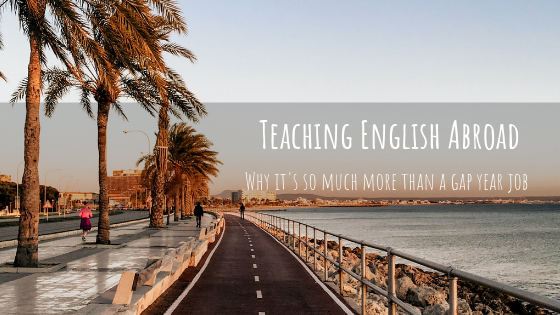 The months leading up to my university graduation ceremony jump-started a period in my life that I’ve since thought of as the Hyperpanic Era, during which I spent a lot of time staring into space and struggling to envision my life in an office setting. I’d nearly completed a degree in journalism and was preparing to move to New York when I had an epiphany, which was simply that I was going to put Corporate America on indefinite hold and instead move to Spain. I made my decision and, without much consideration of the possible downsides, booked my spot on a Barcelona-based teaching course the same week.

“But you could move to New York! L.A.! Chicago!” my parents pressed. “You’ve just spent four years in journalism school, not studying education.” At the time, I wasn’t as concerned about the actual profession as I was about living within two miles of a beach. “It’ll all be fine,” I attempted to placate their concern, not knowing a single thing about what I was throwing myself into, or what I had to gain.

END_OF_DOCUMENT_TOKEN_TO_BE_REPLACED

In an account of my relocation to Montpellier in the South of France, I tackle everything from first encounters to feminism on the other side of the Channel.

Top tip number 1 for moving abroad:  When arriving alone, at midnight, with three suitcases, DO check which Hotel Ibis your reservation is at before you land.