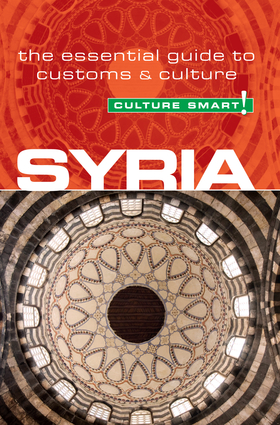 The brutal civil war taking place in Syria today has led to enormous changes throughout the country, and has exacted a cruel price on its people. The tragedies that continue to befall the country has changed its physical and human landscape immensely and, for those who remain, displacement and considerable hardships are suffered by most.

No one is sure how things in Syria will end, for how much longer the brutal and protracted military conflict will continue, or when a tangible peace will be reached, and by whom. Whatever the case may be, Syria and its population will bear little resemblance to what it once was.

Culture Smart! Syria is a window into the rich and complex culture of what has always been an integral part of the Arab world. Having been written prior to the start of the civil war, it is for those interested in the country's history and the traditions and customs of its people, offering testament to a way of life that, though changed immeasurably, should not be forgotten.

Syrians take pride in their hospitality and are eager to demonstrate it for guests, so it is not uncommon for a casual conversation with a Syrian to turn into a coffee or lunch invitation. It's all right to decline politely a first, and then, if it is repeated, to accept the offer as genuine. If one is truly unable to accept an invitation, it is important to express the heartfelt hope that you can take it up in the future.